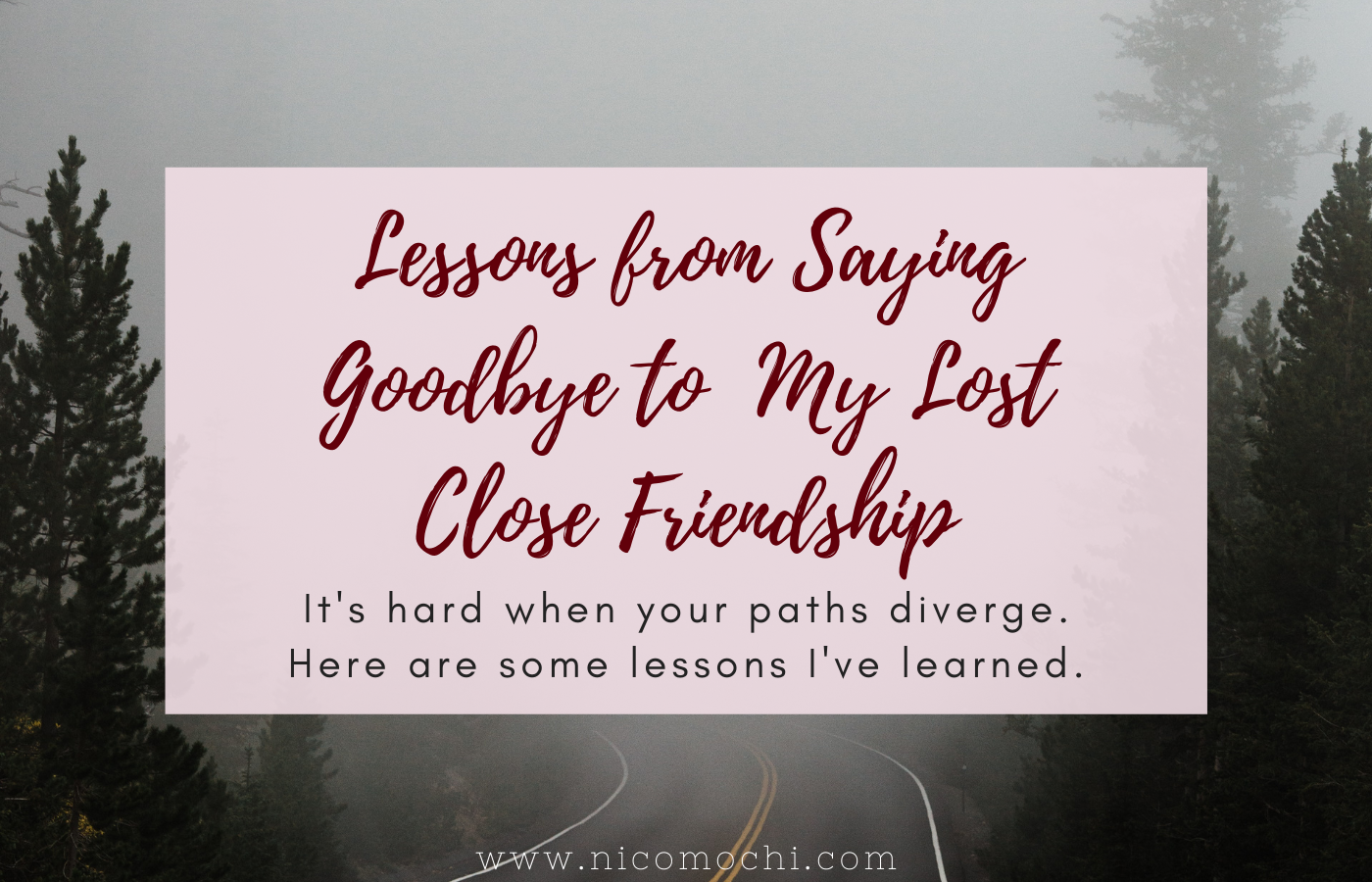 Lessons from Saying Goodbye to my Lost Close Friendship

Friendships drifting and ending is a common occurrence around times of life transition, such as between high school and undergrad, and undergrad to workplace or continuing education and beyond. One of the hardest sets of lessons I had to learn in my adult life were catalyzed from the sudden end of a long-lasting close friendship.

Photo by Katie Moum on Unsplash

Last year, a close friendship I shared throughout undergrad came to a painful, confusing, abrupt end.

To this day, the only possible idea I have of what happened is that I made a life decision that went against their best advice, and they felt they could not remain my friend after I did so. Since they never came back to discuss what was really happening, I have accepted that this self-generated idea may forever be how I interpret this situation.

I wanted to write about my experience because perhaps there aren’t many avenues where people can sit and reflect on lost connections. I think this is because it is seen as a normalized life scenario. People come and go in our lives, and sometimes we never get closure. Perhaps it is common, but that does not and should not downplay the pain of the experience.

In respect to this past friend and to my own privacy, I will be focusing on what I have learned from the experience rather than the experience itself in this post. I believe these will be more transferable and relatable than divulging details about my situation.

1. Your self-blame about the situation may be an attempt to gain control over it.

As someone who has grown up with a fear of abandonment and a strong deterrence to lack of control, letting go of this friendship was incredibly difficult. There was no closure, no further discussion, nor any control I felt over the situation. One day they were here, one day they stated they needed space, the next day they were gone for good.

I 100% blamed myself, though there was no reason to do so, because it was never communicated to me that this was the reason. No matter how many times I replayed the situation, it didn’t make sense to give responsibility to myself. As I now understand it, I jumped to self-blame because it was an easy way for me to fake that I had control over the situation. I was thinking things like:

You did something wrong. You must have. You don’t deserve a good friend. You aren’t a good friend yourself. You are not good enough.

Even though I was punishing myself mentally for the loss of this friendship, it somehow felt better than accepting that it was not because of something I could have done differently. It literally took 3 months of intensive therapy to internalize this, but in fact, there are many negative outcomes that happen almost completely outside of my control. But I resisted, because admitting this would mean giving power over to uncertainty, the bane of the perfectionist’s existence.

2. Friendships ending are often due to many different factors, and is rarely a pure you vs. them situation.

Tossing in your head whether it was your fault or your former friend’s fault is too binary in nature and does not consider all the facts. It is easy to blame yourself because you technically have the ability to control yourself (but not always your circumstances, and definitely never other people). But if you are going through something similar, I want you to know that life isn’t binary. More than likely, there were a myriad factors leading up to your split that you may not be considering.

During my Cognitive Processing Therapy (CPT) sessions, my therapist helped me work through my cognitive distortions around what happened. We found that I was trying to read my past friend’s mind – trying to understand why they left and refused to communicate about it. My mind jumped around ideas that seemed plausible in my head, but will never be confirmed since no one is actually a mind reader. But all of them shared a similar theme: that it was 100% my fault.

She introduced the exercise of making a “responsibility pie”. We found that in response to most negative situations, I tended to blame myself 100% (again, because it is easy to do so and places all the “control” in your hands). She encouraged me to think about all the other factors that were involved in my situation with my former friend, and assign each factor a percentage of that 100% responsibility. She assured me that the time to think about my own responsibility would come afterward.

As it turned out, in the end I only had about 10% of space left in the pie to attribute to “my own actions/behaviour”. And therefore, the other 90% were completely out of my control. A 10% influence on a situation? Doesn’t seem like I had much control over it in the first place.

Once you start thinking about the circumstances and other factors, you can see that in most cases, it does not make sense to make it a purely you vs. them situation. Going a layer deeper, this exercise also helped me realize that the fundamental cause of my initial 100% self-blame was a harmful thought pattern.

This was also difficult to internalize past my incessant and unhelpful self-blame. The recurring thought pattern in my CPT homework I discovered was that when other people become angry with me or disappointed in me, I tend to lift them and their needs on a pedestal and assume that I should feel guilt. And of course, when my past friend asked for space, I immediately assumed I did something wrong and should feel guilt and shame for doing that…something.

This is not an overactive conscience – this is again, me taking the harmful but easy path in my head that I am used to from childhood:

If they’re mad, it’s because of me, and there’s something objectively ‘correct’ that I should have done differently to keep them happy with me. If I didn’t know what this was beforehand, it wasn’t a collective failure to communicate, it was my fault for not seeing it myself. I should be guilty and I shouldn’t have done what I did, because it clearly made them upset.

But what I learned from CPT was that in fact, sometimes when other people don’t agree with the way you act or behave, that isn’t actually your problem. It isn’t really their problem either. It is just that everyone is entitled to live the way they want, in a way that is in connect with themselves and their own values. Only our reactions are our responsibilities.

Here’s an unrelated experience to illustrate the concept. When I think about that time a peer told me that taking a year off from education after undergrad like I did was for people who “don’t know what they want”, I used to jump to shame. After I became aware of my harmful thought pattern, I challenge myself when I start to feel shame. Because I know that what they said came from their own experiences and values, and a choice to have an ignorance of mine. And honestly, perhaps just plain rudeness.

In short, you are ALLOWED to disappoint other people. It is you who ultimately needs to live with the consequences of your life decisions, not anyone else. And no one can predict the future. Not you, and not anyone else.

4. Sometimes the way the split happens is a striking match to enlighten that the connection was unhealthy.

Quite frankly, I realize now that healthy friendships generally don’t end in an abrupt, one-sided cut-off, followed by stone cold silence and abandonment, even after attempts at opening a low-pressure dialogue.

I’ve had many occasions since last year to speak with friends, mentors, and my therapist who let me know with their own anecdotes that in fact… healthy friendships look very different.

One highly respected figure in my life let me know that when she went through something very similar to my situation, their close friends let her know exactly what they thought and what they would advise, but let her make their own decisions and supported her even when there were repeated negative aftermaths. Her autonomy was respected. Her friends were comfortable with the fact that their advice may not be acted upon in the way they hope. Her friends did not cut her off.

It was a vicarious corrective experience to hear their story. Yes, there are friendships that are better, and involve healthy communication and healthy forms of support. This mutual respect and communication is now something that I actively seek in close friendships.

5. At the end of the day, being a healthy friend and being able to see healthy friendships is rooted in awareness of healthy boundaries.

As I’ve learned, this is paramount to a truly healthy friendship.

If your friends are too attached to the way that you choose to live your life and their influence on it, that isn’t necessarily a positive sign of how much they care about you. It is a sign that the connection is unhealthy for both of you, and that your autonomy is not being respected.

In the same way, if you, like me, was too attached to the notion that the friendship would last for a long, long time when clearly the friend jumped ship from that path, that is understandable, and, it is not healthy either.

Whatever your differences in values and experiences are, a healthy friendship involves communication and keeping of personal boundaries, which only you and your friend can define together.

Be kind to yourself – losing a close friend IS hard. It is valid to be feeling upset about it. There is no right timeline to be ‘over’ what happened.

Another friend of mine shared that they lost some friendships abruptly recently as well, and that it took them a very long time to feel alright again, similar to me.

Without even sharing too many details of our respective situations, we discussed that healthy friendships and the end of those friendships involve respect that both people are on their own, parallel paths. And that perhaps when they diverge, neither are lesser or greater for it – it just is what it is.

I spent months and months mourning this friendship after my initial reach out was ignored, and expended much emotional energy into trying to process it. I think different people will respond differently to the loss of a close friendship, but it definitely hit me hard.

Some days will be better than others, and maybe you won’t ever fully forget or lose the pain. But maybe you don’t have to, since you will have learned from it and through it to take forward into new connections. That’s all we can really ask for in this crazy ride called life.

Always remember to BKTY (be kind to yourself),

This site uses Akismet to reduce spam. Learn how your comment data is processed.

Thanks for visiting my mental health and wellness blog! I promote two ultimate messages of self-love & self-care: embrace imperfections and be kind to yourself!

I call this the imperfectionism lifestyle. My goal is to aid in making mental health and wellness a priority for more people – by making it simpler to practice doing so!